It goes without saying that international students are some of the most diligent and successful scholars on campus. The obstacles that students from other countries face when studying in the U.S. are considerable, which makes their accomplishments all the more amazing. Recently the Intensive English Program (IEP) congratulated several alumni who successfully completed their fields of study and graduated from NC State. William Haselton, IEP Lead Instructor, interviewed three of the students who were among the first IEP alumni to graduate from the university. 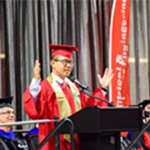 Juncheng “Bill” Zhou had the distinct honor of being featured as the student speaker at the Electrical and Computer Engineering graduation on May 12. In his speech, Bill recounted a disappointing experience at the end of high school in China, when he failed the college entrance exam known as the Gao Kao. “At that point, I did not know what my future would hold,” Bill reflected. “The best decision that my parents made was to allow me to study abroad in America. And that decision totally changed my life.” Bill graduated Summa Cum Laude with a B.S. degree in electrical engineering. After graduation, Bill will serve as a mobile product intern with Qovro in Greensboro, and then he will continue his studies at NC State in the Accelerated B.S. and M.S. program in electrical engineering.

His advice for other international students at NC State? “Get out of your comfort zone and get involved in campus activities,” Bill remarks. “Find ways to serve in the community. Don’t just think of yourself as a foreigner, but as part of the community.” He has modeled that advice while at NC State by participating in Service Raleigh, volunteering at a local food bank, and joining an Alternative Service Break experience in Washington, D.C.

In addition to his community involvement, Bill served at NC State in several capacities: Engineering Ambassador, teaching assistant for E101 Introduction to Engineering, and undergraduate researcher in 3D printing technology under Dr. David Ricketts. Bill was one of the founders of the Society of Asian Scientists and Engineers at NC State. His internships with Analog Devices and Hughes Network Systems provided him with invaluable professional experience to accompany his studies.

Bill is thankful for all of the support he received at NC State that enabled him to succeed. “The IEP gave me a chance to prepare for university, overcome culture shock, and make a good transition,” he comments. “At the university, I had lots of support from OIS (Office of International Services), CDC (Career Development Center), the ambassador program, and all of the people in the engineering department.”

And what surprised him about studying in the U.S.? “I didn’t know the workload at the university would be so hard,” Bill reflects. “It was hard to find time for fun stuff. But the food was better than I thought.”

At this year’s Chemical Engineering graduation, Bhavana Popuri was valedictorian with a 4.0 GPA. In addition to being a top student in her field, Bhavana is proud of the work she and her team did on their senior design project, which featured a variable health tracking device. She was also honored by the opportunity to do research with Dr. Saad Khan studying rheology (dealing with the viscosity of materials and how they are affected by temperature and pressure).

Bhavana’s road to academic achievement was not always well-paved, however. As in the case of many international students, studying far away from her home in India has presented many challenges. Bhavana has had to confront numerous personal difficulties, and for some time she even considered returning to India. With the support and encouragement from one of her family members, she found the inspiration to keep going.

She has some valuable advice for other international students at NC State: Take advantage of the resources available to you on campus. “Many people are shy about talking with others,” she notes. “You have to interact more and talk with your advisor to get advice about classes.” In addition, she advises students to make use of the Writing Center for help with writing assignments, the Counseling Center for assistance in dealing with stress, and the Career Development Center for help with career planning.

Bhavana was surprised by several aspects of her university experience at NC State. She was amazed at the smorgasbord of majors available at the university. The education system itself required that she make some adjustments in her thinking. “In the U.S., every assignment counts–and even attendance,” she remarks. “In India, only the final grade counts.” Not only that, but she had to learn to use her own ideas to write answers on the tests, instead of just memorizing the answers provided by the professor. Transportation was another unpleasant surprise. Without a car, she was frustrated with having to walk long distances, and buses were not always convenient.

Bhavana has been grateful for the experience she has had at NC State, starting with her time at the IEP, which helped her overcome culture shock upon arriving in the U.S. At the IEP, she also met some other international students who have become her best friends. She discovered what plagiarism was (and how to avoid it), how to take notes in lectures (and understand different accents), and how to make presentations in front of a group.

In addition to the academic subjects in her major, Bhavana has enjoyed taking advantage of activities available both on-campus and off-campus. She has participated in classes for yoga, mixed martial arts, aerobics, and other PE classes. She has also enjoyed the natural beauty of Lake Raleigh and Lake Johnson.

After graduation, Bhavana hopes to pursue her OPT (Optional Practical Training) by working in a U.S. company for a year, and then she plans to attend graduate school to study for an M.D. or Ph.D. in bioinformatics or biomedical engineering at Berkeley, Yale, or Duke.

Like her friend Bhavana, Floret Su also graduated from NC State with a B.S. in Chemical Engineering. Floret has many special memories of her time on campus. She remembers the first football game she attended as a freshman–NC State vs. UNC–which really made her feel like part of the Wolfpack. She has been amazed at the diversity she has encountered on campus and has enjoyed meeting people from many different backgrounds. She has found the professors and students in her department to be very helpful in making her experience at State a success.

As an international student, Floret has naturally found living in another country to be a challenge. Like many students living on their own for the first time, she has had to manage her time, eat healthy, and keep her life in balance. She has found her classes to be quite difficult, and even working together with others on group projects has not been easy. Still, those group projects have forced her to learn to communicate with other team members, which obviously is a valuable part of the educational experience. She encourages other international students to try to build a network of relationships with others and to take advantage of the chance to make friends with people from different countries and learn about life in different places.

Floret considers the IEP to have been an important part of her journey at NC State. She comments that the IEP prepared her well for her undergraduate studies, and she considers finishing her study at the IEP to be one of her major accomplishments (along with finishing her Chemical Engineering degree, of course).

After graduation, Floret plans to attend graduate school at Cornell University in Ithaca, New York, to pursue an M.S. in Chemical Engineering. She ultimately hopes to work in biopharmaceutical industrial research.

The Intensive English Program, founded in 2012, is a full-time, non-credit academic program for international students who have not met the English language proficiency requirements for admission to NC State. The IEP prepares conditionally-admitted students for the challenges of the university. Students at the IEP strengthen their academic language skills needed for success as well as learn more about American culture and university expectations.