Ilin Misaras is the assistant director of the Global Training Initiative (GTI), a unit of the Office of Global Engagement, where she works to market the GTI’s education and training opportunities for students and professionals to audiences locally and across the globe.

Tell us a little bit about yourself.

I’ve only been working in international education for the last 8 years of my career. In my previous life, I was a broadcast reporter who worked for (then) News 14 Carolina and had previously worked with local NBC affiliates, CNN International, and Bloomberg News, among other news outlets. I even spent a year as a reporter and anchor in Alaska! I got my bachelor’s degree in journalism from New York University and my master’s here at NC State. I was born in Taipei and grew up in various cities along the east coast of the U.S. My husband and I have lived in Raleigh for the last 9 years, which is the longest I’ve lived in any city.

How long have you been with NC State and the Office of Global Engagement?

Since January 2012 as a full-time employee, but I’ve been working with the GTI since July 2010 when I started as a TA as part of the MIS program at NC State.

Tell us what you do in a few sentences.

I mainly focus on the marketing and communications of our programs and initiatives within the GTI, but I am also involved in the development of our global skills training program, including the incorporation of new technologies like VR and AI into our training.

What’s your favorite thing about your work?

I love that there’s always something new and interesting going on in the GTI. We have a very creative, resourceful, and talented team that is always contributing new ideas about how to make our current and new programs bigger and better. The students and professionals we bring to NC State from all over the world have such interesting stories, and I’m glad that our lives get to intersect (even if it’s very brief) and hope that we make an impact on their lives and they leave with a positive impression of the university and our state.

Tell us one thing we might be surprised to learn about you.

I got to fly in an F-16 as part of my previous career and conquered 9.3 Gs during our flight! Email me and I’ll share some videos of that experience. 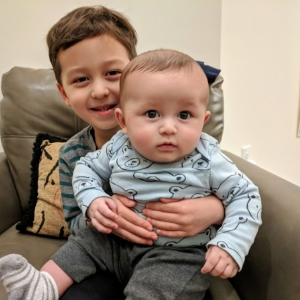 What do you like to do outside of work?

I have a preschooler and an infant now, so any free time we have is spent playing and entertaining them. My husband and I also enjoy the Broadway shows at the DPAC. Since I went to college in NYC, I was very spoiled and got to see a lot of shows as a student. I’m glad I still get to theater geek out here in the Triangle.

What’s one thing on your desk you brought from home?

I have a digital photo album with photos from our wedding (I just haven’t had time to update the pictures since then).