A delegation of NC State administrators and Chancellor Randy Woodson traveled through South America in May on a trip focused on visiting NC State’s partner universities and building new relationships with institutions in Colombia and Chile. Throughout the trip, Chancellor Woodson met with university rectors, faculty, ministry officials, NC State alumni, and students to share the “Think and Do” spirit with present and future partners. 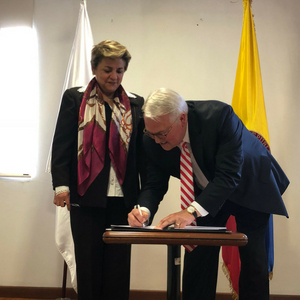 While in Colombia, the NC State delegation met with the Fulbright Association, the Cultural Affairs team at the U.S. Assembly, and the Deputy Director of Higher Education at the Ministry to discuss the future of higher education in Colombia. One of Chancellor Woodson’s first stops on the trip was a meeting with the Universidad del Tolima, where he signed an agreement to enhance the previously formed consortium with NC State Poultry Science and several other universities and industries.

Also in Colombia, Chancellor Woodson met with Rector Dolly Montoya Castaño to sign an agreement with the Universidad Nacional de Colombia, initiating joint research activities on topics related to biotechnology, natural sciences, agriculture, and veterinary medicine. The Universidad Nacional de Colombia is one of the largest institutions in the country, and the agreement opens a door for research and exchange.

Chancellor Woodson later visited Universidad de La Salle, known for innovative social and educational projects for young farmers, where he signed a partnership agreement with Rector Alberto Prada Sanmiguel. The visit in Colombia concluded with the signing of partnership agreements with the Colombia Challenge Your Knowledge Consortium, EAFIT University, and the Universidad de Tadeo. 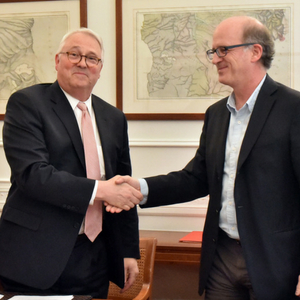 After arriving in Chile, the NC State delegation toured the campus of Universidad Diego Portales (UDP), a university with strengths in architecture, law, and journalism. During the visit, Chancellor Woodson met with university administrators and faculty to sign an agreement focused on design and study abroad exchange. As a result of the new partnership, UDP will hold a summer program for 10 students with NC State’s College of Design this summer and is working to expand future opportunities.

The next stop on the visit was the Universidad de Chile in Santiago, an innovator in science, technology, social sciences, and art. Hernan Merchant, a professor in the College of Design at NC State, is an alumnus and former faculty member of the Universidad de Chile and attended the presentation by Chancellor Woodson on collaborations with NC State. Also in Santiago, the delegation made a visit to the Universidad Andrés Bello. Together with Rector Jose Rodriguez, Chancellor Woodson signed a Collaboration Agreement between the universities to work on the development of programs for the Faculty of Architecture, Art, Design, and Communications.

The group then traveled to Concepción, Chile to meet with one of NC State’s partners in research publications and student exchange, the Universidad de Concepción. Rector Carlos Saavedra and Chancellor Woodson discussed the significant partnership and strategized for increased research collaboration and graduate student mobility between the universities. During the evening, NC State alumni in the area visited the Universidad de Concepción for a special alumni dinner with the Chancellor. 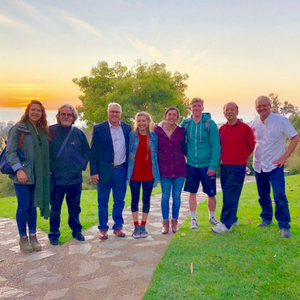 The trip culminated in a meeting between Chancellor Woodson and four NC State students currently spending a semester abroad at the Vina del Mar campus of Universidad Adolfo Ibáñez in Chile. Since 2015, the university and NC State have maintained an agreement for student exchange. The students had a chance to share their experiences of studying at the university as well as traveling throughout South America during time off from their coursework.

“I thought it was really great that the Chancellor was so interested in visiting the university. It shows a great level of concern. I was super happy to show them the campus and talk about how great the international program is,” said Mallory Barret, an NC State student studying at Universidad Adolfo Ibáñez. “I’ve had an all-around awesome experience and only had nice things to say which made it easy to brag about UAI. I hope the two universities will continue to exchange students between them because I really think so highly of UAI and the exchange program.”