Tournées Film Festival, founded by the FACE Foundation and Cultural Services of the French Embassy, brings French cinema to campuses across the country. Since 1995, the festival has reached more than 500,000 students at more than 500 colleges and universities. Genres covered during the event include fiction, documentary, animation, repertory films and more.

The diverse selection gives viewers the chance to experience the richness of French films and to expand their cultural horizons. Each showing is free and open to the public, and includes an introduction by an NC State or other local faculty member. This year’s films include the following:

“The Tournées Film Festival at NC State started in January 2016 as a partnership between the Union Activities Board’s Films Committee, NCSU Libraries, and the Global Training Initiative (GTI),” said Ilin Misaras, assistant director of the GTI. “Since that time, festival attendance has surpassed 1,300 tickets for 12 films, a great indicator for future success.” 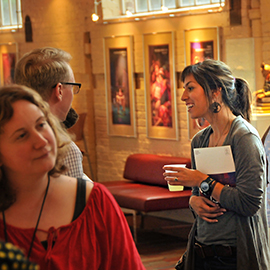 The turnout, combined with local sponsorship support from the Cultural Services of the French Embassy in the U.S., the Centre National du Cinéma et de l’Image Animée, the French American Cultural Fund, Florence Gould Foundation and Highbrow Entertainment, inspired a new pursuit. Festival organizers would like to turn the Tournées Film Festival into an international film festival on campus.

“We are excited about launching an international film festival at NC State, and we believe the success we’ve had with Tournées so far is an indicator of how successful it would be,” said Misaras. “We believe an international film festival can showcase the diversity we have here on campus and the surrounding community. And, we hope it is a launching point for more dialogue and programming to promote cultural awareness and understanding both on and off campus.”